Why Paintless Dent Removal Is Worth Your Time 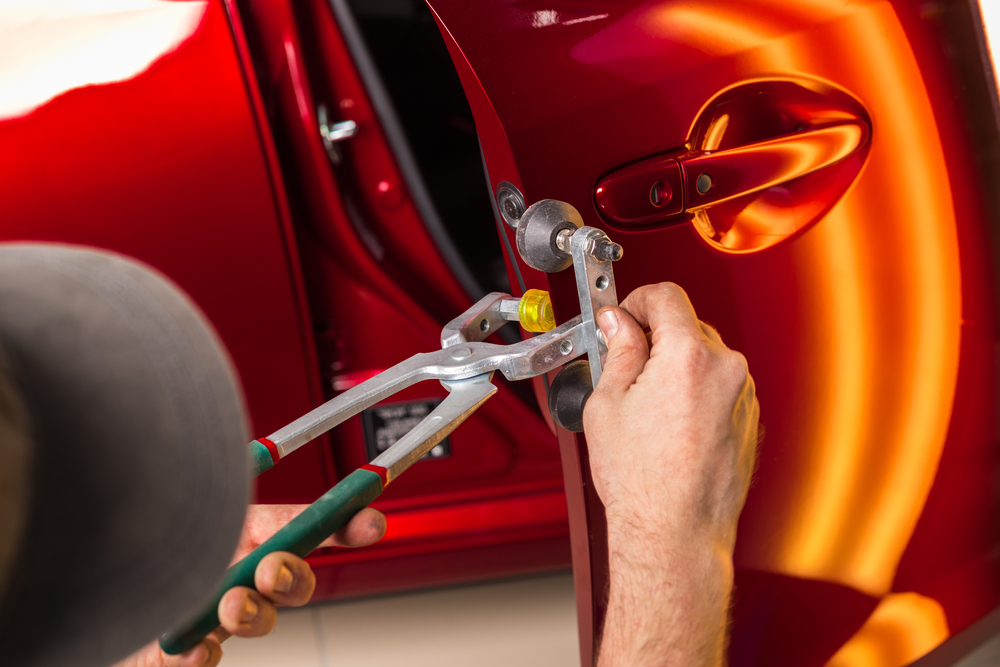 As a car owner, you are likely well aware of the banes of dealing with car repairs. No one likes spending their time and money on car maintenance, but it is necessary if you want to keep your vehicle in good condition and working properly.

Though often considered minor damage, dents and dings can be the most irksome to deal with because they happen so often. In many cases, car owners will ignore repairs for dents and dings because they don’t want to constantly have their car in the shop and spend all of their money on minor repairs.

However, avoiding dent repair can actually do more harm than good. Even the smallest dents or dings that seem inconsequential can grow in size over time and result in more severe damage, such as cracks in the paint and the development of rust. And waiting too long to deal with these things can also result in higher repair costs and a reduced resale value.

This is why it’s important to have your dents repaired as soon as possible. And the most convenient way to do this is with paintless dent removal (PDR). PDR is a more modern and efficient technique of repairing dent damage with numerous benefits compared to traditional dent repair methods.

Let’s take a look at the top 5 reasons why working with an experienced paintless dent removal shop is worth your time:

While traditional repair methods can take days and even weeks depending on the extent of the damage, PDR takes a fraction of the time. This is because older methods involve stripping the paint, using fillers to fill the dent, sanding to make the damaged area smooth again, and then color matching and painting the sanded area. With PDR, however, technicians simply use a special set of tools to massage or pop the dent out, which takes much less time.

Because fewer tools and less time are spent on the repairs, paintless dent removal also costs much less. A significant part of the cost that comes with car repairs is the price of the materials the shop uses to complete the job and the time, experience, and labor that the technicians put into doing the repairs. So because PDR is less labor-intensive and uses only a special set of tools, it doesn’t cost as much.

One of the most important benefits of paintless dent removal that makes it well worth your time is that it doesn’t compromise your vehicle’s resale value. All cars drop in value the moment you drive them off of the lot, but other things also lower the value, such as damage and car repairs.

Because traditional dent repair methods involve stripping the original factory paint finish to fill in the dent, it has a significant impact on the resale value. With PDR, however, the paint is untouched, and the dent is massaged out instead of being covered up, which means once the repairs are done, it’s as if your car was never affected, which means it retains its resale value.

Today, living sustainably and reducing your carbon footprint wherever possible is important. However, most people don’t take this into consideration when having their car repaired. But the shop you choose to work with and the method of repair can have an impact on the environment.

Because traditional repair methods use toxic materials and chemicals, it is not as safe for the environment or the technicians that have to breathe in the noxious fumes. When repairs take longer, it also means more energy is used to get the job done. Because PDR doesn’t involve the use of any chemicals, however, and because it takes much less time, it is much more environmentally friendly and safer for the technicians.

Overall. Paintless dent removal is also much more efficient than other methods of repair. Conventional methods typically involve covering the dent with fillers and paint, which means the dent still technically exists. With PDR, however, the dent itself is entirely removed by massaging the metal back into place. This means your car looks just as it did before, and there is no concern as there is with conventional repairs that the paint or fillers will wear down, and the dent will eventually show through again.

When it comes to choosing the right shop and the right repairs for your vehicle’s dent damage, paintless dent removal is the way to go. It’s well worth your time because it saves you time in addition to the numerous other benefits.

When you need dent repairs, trust the experts at Killa Dent Removal. Our highly skilled and trained PDR technicians can get you back on the road in no time. Our paintless dent removal specialists provide fast and efficient high-quality repairs with a 100% Satisfaction Guarantee. For a FREE estimate, contact us today!